The Social Platform  for Decent Work in Agriculture (DWIA) was established  to record, connect and amplify the impacts of social dialogue initiatives (SDI) within the fruit and wine value chains of the agricultural sector in the Western Cape.
Various SDIs have been set up with the broad aim of improving living and working conditions on farms and pack houses.
The Ethical Trading Initiative (ETI) has partnered with the Labour and Enterprise Policy Research Unit (LEP) at UCT and Phuhlisani NPC to facilitate linkages between diverse SDIs and explore issues of common interest between them.
Farm worker housing, access to services and tenure security have emerged as key focus areas. Certain SDIs, such as the Laborie Initiative have commissioned research on this topic.  DWIA workshops were also held during 2017 to discuss what could be done in this area.
It was agreed that organisations contributing to the DWIA initiative would contribute to the preparation of a policy brief and discuss a joint submission to government. 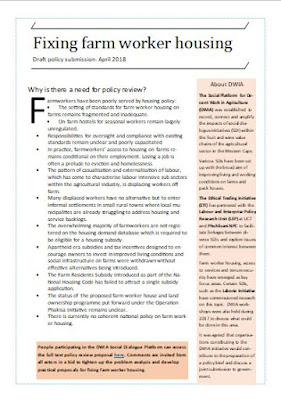 You can view a four pager and comment on a longer policy submission. Access the folder here
This draft submission wiull be discussed at the DWiA workshop in Paarl on 12 and 13 April 2018
at April 03, 2018